What are the civilized signs in public places?

Strictly speaking, as long as we are out of the house, we are in a public place.But what we generally think of as public places are places that have been developed with specific functions, such as schools, hospitals, business centers, and so on.Since it is a public place, the flow of people is generally very large, related supporting public facilities can be Shared to all people, rather than like home items are private.Therefore, there will be some rules that need to be followed together, and the publicity of these rules needs a carrier, which is the civilized signs in public places that we are going to share today. In general, the civilized signs in most public places have the following three types. 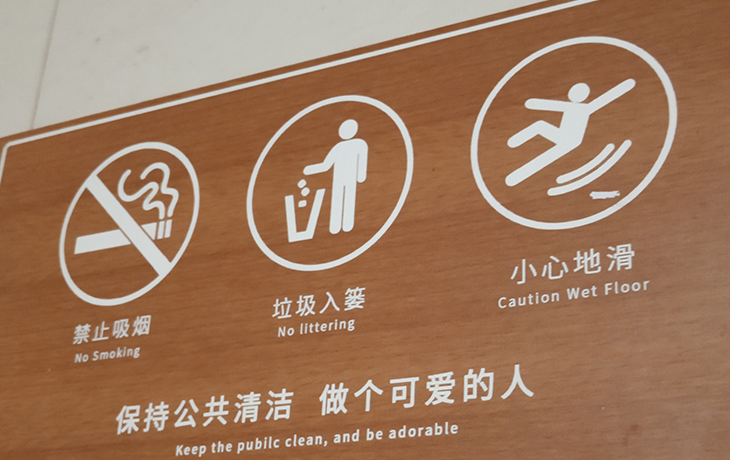 1. Prohibition sign. In theory, our action can determine that civilization is taking a big step forward, but in fact it is still difficult for everyone to do it, so public areas need to set a no-smoking sign and no-spitting sign. At present, many areas are relatively doing better, and they can guide people's behavior with a small number of civilized signs, but once they leave this particular area, the situation is a world apart. This illustrates another serious issue that the uncivilized behavior does not occur in a particular area does not prevent this behavior from happening outside the area.It's a question that goes beyond what we've been talking about as signs of civilization, so I'm not going to go into that;

2. Trash can indication sign. It is a symbol of civilization to do not throw garbage anywhere. Unlike other prohibition signs, the trash can indication sign tells you that the trash needs to be thrown in the designated place. In recent years, there has been a wave of garbage sorting. No matter what type of trash can, it is inseparable from the description and guidance of the signboard. Especially for sorting trash cans, the classification signs should generally be clearly installed in the corresponding positions.

3. Warning sign. This type of sign is mainly used to inform people of the precautions in public places, such as wet floor on rainy days, beware of slipping, and there will be safety notice signs at the exit of the elevator. Warning signs will also be displayed on the stairway.In fact, these common sense things are also the embodiment of civilization;

The above are some of the major civilized signs in public places. When it comes to different places, it is still very different, because the civilized signs set by each place according to the services provided by themselves are naturally different. No matter what kindstyle of the logo, or the language and even the pattern symbols, there are big differences. But usually the civilized sign is nothing more than the types mentioned above.

Previous:What are the characteristics of intelligent digital sign? Next:Some specifications on the setting of evacuation signage