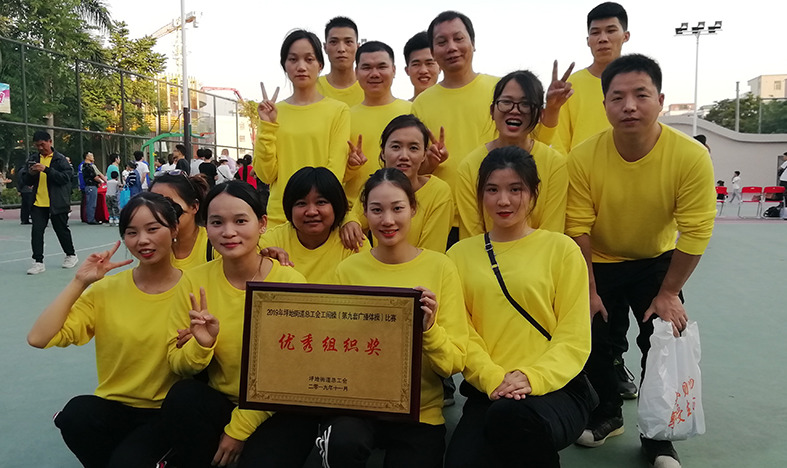 According to the competition rules and relevant spiritual instructions of the Pingdi Federation of Trade Unions, the COSUN SIGN administrative department made detailed arrangements for the competition one week ahead of schedule, from the company to draw 20 people to team up, urgently customized the special clothing for the competition, and organized the use of spare time. The team conducted intense and orderly training and rehearsal work. In order to play a better state on the spot, the company organized all the team members to make the last rehearsal in the company at 1 pm on Sunday, and corrected some details of the team members' mistakes, and then went to the Fumin Park competition site. Use the free time to conduct a second rehearsal on the spot at the competition site. On the court, all members of the COSUN SIGN team unified the yellow T-shirt, and the spirit of the full performance of the wonderful work, each movement has achieved the freedom of relaxation, relaxation, in line with the standard of gymnastics, got the on-site referee Agree.

In order to participate in the trade union competition, the COSUN SIGN team members demonstrated the company's excellent style of not being afraid of being tired and tired. They gave up the rest time after work and invested in intensive training, and gave up the rest time of the weekend to participate in the rehearsal of the competition. In the end, the hard work pays off and wins the grand prize.

Through this work competition, the exchange between COSUN SIGN and the enterprises related to Pingdi Street has been strengthened, and the amateur spiritual and cultural life of the company employees has been enriched, demonstrating the positive spirit of COSUN SIGN. After the game, the members of the COSUN SIGN team said that they have enhanced the friendship and feelings between colleagues through this event, and learned a lot of things outside of work, which is a valuable asset for their growth.